With all of the different information outlets available on the Internet today, it's important to know which ones are credible and worth sticking with, and which ones are full of baloney and are better off avoided.  So how does the Huffington Post stack up in terms of trustworthiness?  Is it a reliable source for news?

The short answer is: "sort of".  The long answer, which we went over somewhat in our Huffington Post review, is: whether or not the Huffington Post is credible depends on what kind of content you're looking at, as well as your own point of view.  We'll explain what we mean below.

There are three major factors that contribute to the credibility (or lack thereof) of the Huffington Post.

1.  It's more of a news aggregator than strictly a newspaper.

Despite the fact that the Huffington Post calls itself "the Internet newspaper", it's really more of a news aggregator instead.  What this means is that, while it has its own staff writers who publish stories occasionally, quite a bit of its news is taken from other news outlets.  These include ABC, BBC, the Associated Press, Reuters, the New York Times, the Los Angeles Times, and CNN.  (A full list can be found at the bottom of their website).  So at least some of the content that you read on the Huffington Post will be written by accredited journalists, and you can usually trust these stories.

Editor-in-chief Arianna Huffington has publicly stated that the articles that appear on the Huffington Post are "a reflection of our traffic, our brand, and the fact that we are increasingly seen as an Internet newspaper", and not a product of the Huffington Post being "positioned ideologically in terms of how we cover the news."  However, there are many who notice (or at least believe) that the stories selected for the Huffington Post often reflect a progressive liberal-socialist (i.e. "left-wing") political point of view, as opposed to a socially-conservative traditionalist (i.e. "right-wing") political point of view.

Many also claim that the Huffington Post was intended from its creation to be a "left-wing" alternative to "right-wing" news aggregators such as the Drudge Report, especially since Arianna Huffington has been a politically-active author for most of her career.  What this all means is that you should be conscious of the fact that, like in many modern news media outlets, what you read on the Huffington Post may not be showing you all sides of the story.

3. Not all of its content is written by professional journalists.

While much of the Huffington Post's content is written by their staff writers and journalists from other accredited news organizations, a significant portion of it is not.  Much of this content includes opinion and editorial pieces, often in the form of online journal entries (known as web log — or "blog", for short — posts).  Some of these are written by experts who are greatly respected in their corresponding fields of work, and thus are fairly reliable.  However, many others are written by (Internet) celebrities, media departments of non-journalistic organizations, and other guest writers.

Therefore, the credibility of these pieces varies greatly, and — as mentioned above — may not tell all sides of the story.  In particular, the Huffington Post has received criticism from the scientific community (and some other media outlets) for how it has handled the coverage of certain health-related topics, such as the safety of vaccinations and alternative medicine.

Our best advice to you while reading the Huffington Post is to be skeptical without being cynical.  That is, you don't have to (nor should you) take everything that you read on there as a bunch of nonsense.  You just have to be aware that the information may be factually correct, but the way that the author has written the piece may just be one way of interpreting the information.

The author's background may have a bearing on their viewpoint, such as if they're a teacher, politician, journalist, or student.  Due to space constraints, certain information about a story may be left out in favour of other information.  The people who comment on a story may fill in some of the blanks and give a balanced perspective, or they may not.

The bottom line is that it is very hard — if not impossible — for any news story to be completely objective and unbiased.  So it's okay to think a little deeper about what you're reading, ask questions, and perhaps even consult other sources if something seems confusing, vague, or one-sided to you. 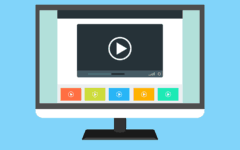 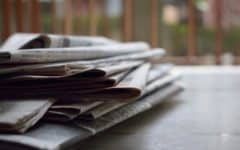 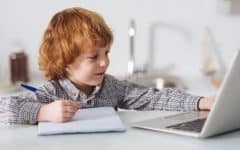 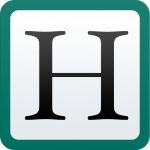 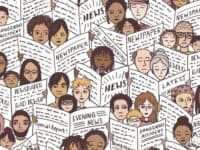 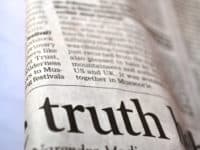