Now that we’ve told you about what Tumblr is and how it works, you might be wondering about how safe it really is. In this article, we’ll go over whether or not Tumblr is safe, as well as some tips for Tumblr security to help you stay safe when you’re using the blogging platform.

How safe is Tumblr?

Tumblr is safe to use. If you don’t want your blog to be seen by anyone and everyone, you can make it private. If you have a problem with another user, you can block them. If you see something that shouldn’t be on Tumblr, you can report it. Doing these things will make for a better experience.

We should mention that Tumblr does allow blogs with sexually-explicit content, but they have taken measures to ensure that people who don’t want to see that sort of content can avoid it. They have also taken measures to block and otherwise deal with blogs regarding suicide, eating disorders, and other forms of self-harm. Also, they don’t legally allow anyone under the age of 13 to use Tumblr.

Still, there are a few general precautions that you should take when using Tumblr. Here are four tips to keep in mind for when you’re using the platform.

1. If you don’t want others to be able to see your blog, keep it private.

As we mentioned in our introduction, if you just want to make your blog something that you write for yourself and don’t want to show it to anyone else, you can set your blog to be invisible to people who aren’t already following your activity. They won’t be able to find it if they search for it on Tumblr, and even if they try to find it with a regular search engine, Tumblr will prevent them from accessing it by acting like your blog doesn’t exist.

In general, though, remember our number one caveat for social tools on the Internet: once someone shares something that you’ve posted, it’s out of your control. You’re not in control of what other people do with their accounts, and it’s usually difficult to get Tumblr’s administrators to take down content that you don’t want shared faster than other people can share it.

2. Block explicit content from your search results if you’d rather not see it.

Generally, if you’re just searching Tumblr while not logged in, you won’t see any explicit content.  However, if you’re searching for content while logged in, you can choose to hide sexually-explicit results by clicking the padlock icon on the right side of the screen to move it to the “locked” position.

3. If you see something that you don’t think should be on Tumblr, report it.

If you see a post while browsing or searchingthat you don’t want to see or don’t think belongs on Tumblr, you can click the three dots beside it and then click Flag This Post. Then, fill out the form that appears to tell Tumblr what the problem with the post is.

If you can’t do this (possibly because it’s on someone’s personal blog), then you can fill out an abuse report by clicking this link. Be sure to include the web address of the offending post (e.g. it will usually be in the format “example.tumblr.com”) so that Tumblr knows where to look.  As an added bonus, you won’t see that post again.

More information on flagging inappropriate posts can be found here.

4. Block any users who may be bothering or harassing you.

If someone is harassing you, threatening you, or otherwise sending you incessant communication, you can block them. This will prevent them from finding or following your blog, sending you messages or questions, or seeing, liking, or re-blogging your blog posts. You can even block anonymous users; Tumblr will block the Internet address that they were using, instead. Note that if you have multiple blogs, you must block individual users for each one.

Instructions for how to block users can be found here.

Those are some tips to keep in mind in order to have a safe and enjoyable Tumblr experience! Be sure to read through the rest of our Tumblr course to learn the basics, like how to create a blog, and how to post content to your blog. 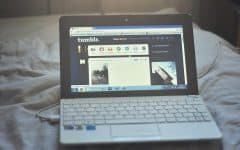 6 Ways to Get More Followers on Tumblr 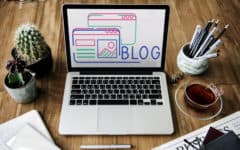 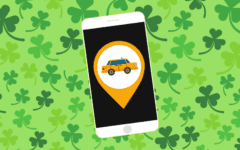 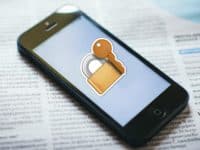 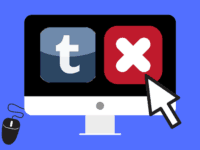