Home » Online Entertainment » Music and Audiobooks » Spotify Course » What is Spotify and How Does It Work?

Swedish entrepreneurs Daniel Ek and Martin Lorentzon thought so, and that’s why they created Spotify.com in 2008.   Since then, Spotify has quickly become one of the most popular services of its kind.  As of June of 2015, Spotify had over 75 million users listening to the music that they love through it.

So what exactly is Spotify?

Spotify is what is known as a music streaming service.  This means that it plays songs off the Internet as they load through the Spotify application.  You can also create playlists of songs that you like, or create “radio stations” based on music that you already like to discover more music that you might enjoy.

The songs aren’t actually on your computer (with some exceptions), which is a blessing and a curse.  It’s a blessing because your songs can’t get deleted or go missing, since Spotify is always in control of them.  However, it’s also a curse because you can only play the songs in the Spotify application; you can’t play them anywhere else, or move them to another device (unless that device also has Spotify on it).

How does Spotify work:  4 steps to enjoying music on Spotify

The first step to using Spotify is to get yourself an account.  This lets Spotify identify you as a unique user.  You can sign up using your Facebook account, or you can sign up with plain old email.  Just enter a user name and password, your email address (and a copy of it), your date of birth, and your gender.  Then click Sign Up and you’re set! 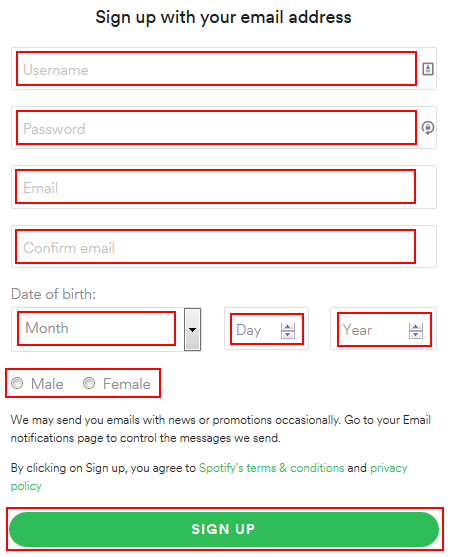 2. Purchase a subscription to Spotify Premium to get the most out of Spotify (optional).

You can use Spotify for free, but your options for using it will be somewhat limited.  For example, you will see advertisements in the application, and hear advertisements between songs.  You will also not be able to download your playlists of songs in order to listen to them even if you aren’t connected to the Internet.

A Spotify Premium subscription costs $10 per month.  However, Spotify has various promotions that allow you to subscribe for a period of time for free (or almost free), or even cut the cost of your subscription in half.

Our How Much Does Spotify Cost article has the lowdown on Spotify Premium, including how to sign up for it and how to take advantage of various discounts for it.

3. Download and install the free Spotify application on your device of choice. 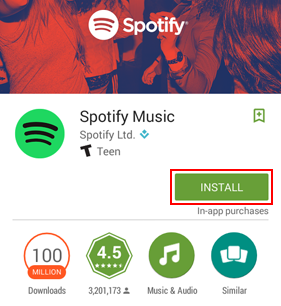 4.  Enjoy as much music as you want on Spotify, however you want to listen to it!

The remainder of our course tutorials (i.e. excluding our “Extra Resources” section) will teach you how to use the essential features of Spotify.  Our “How to Use Spotify” tutorial will show you some of the basic features of the application.  How you use Spotify from there is up to you!

As you see, Spotify can be used for free, is available on all sorts of different platforms, and offers you several different options for discovering and managing your favourite music.  No wonder it’s one of the most popular music streaming services on the Internet today!  So, does Spotify sound intriguing to you (no pun intended)?  Then stick with us as we dig a little deeper into what you’re capable of doing with Spotify in the rest of our Spotify course. 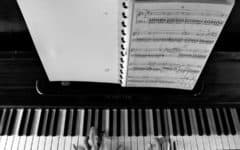